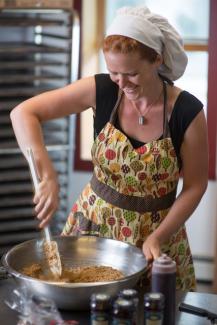 Butterfly Bakery of Vermont is a small bakery and food processor started making maple sweetened baked goods in 2003. In 2011, owner Claire Fitts Georges started talking with farmers and tried making a few hot sauces using excess hot peppers from local farmers. The hot sauces kept selling out, and production has increased year over year. Claire began working at the Vermont Food Venture Center to keep up with demand, and to scale up her production. After a year, it was clear she was ready to graduate and move into her own space - closer to home and to easier to bring all her products under one roof. In 2017 Butterfly Bakery applied to the Vermont Equipment Access Program to finance a few key pieces of production equipment. This revolving equipment lease program allowed Claire to fill her new space with the most appropriate fillers and kettles. 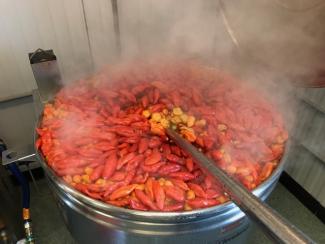 She then applied to the Vermont Farm Fund for a loan to expand its hot sauce line to include specialty craft beer hot sauces created in partnership with local breweries including The Alchemist, Queen City Brewery, Switchback, 14th Star Brewing and Stowe Cider. Claire has on order over 17,000 lbs of hot peppers this season and plans to process them in her new commercial kitchen in Montpelier.

With support from VFVC, and our two innovative financing programs, Claire can get back to what she wants to be doing most - making terrific sauces, with local farmers and other local food businesses.

Vermont grows fantastic peppers. Our lush soil and wet heat produces a full flavored, fleshy, heat-packed peppers. Chili pepper plants require little attention during the growing season, allowing farmers to focus on their quicker crops until the peppers are ready for harvest. I firmly believe that Vermont can make a name for our chili peppers, like the Finger Lakes did for themselves for wine. We already have such a phenomenal food reputation that all we need to do is get our peppers in the hands of customers around the country and the globe for folks to see that we have something special here. Vermont beer is already considered some of the best in the world and the pairing of beer and hot sauce is simply a recipe for success.