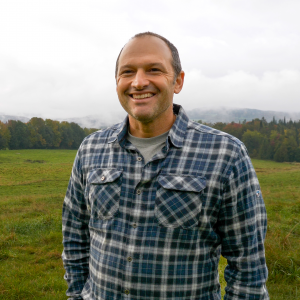 Jon grew up on his family’s dairy farm located in Greensboro. Jon continues to manage the farm, now raising Black Angus cattle for both breeding stock and beef, and pastured poultry. Before joining the CAE, Jon was most recently the Director of the Farmland Access Program at the Vermont Land Trust (VLT), where he focused on farm affordability for new and beginning farmers statewide. Prior to becoming the Director of the Farmland Access Program Jon worked in VLT’s stewardship program as an intern in 1998 and was hired fulltime June of 1999. Jon continued to work in stewardship at VLT until 2001 when he became the Agricultural Project Manager for VLT in the Champlain Valley office. Between 2006 and 2009 he was VLT’s Agricultural Stewardship Manager working statewide. Jon graduated from the University of Vermont in May 1999 with a B.S. degree in Natural Resources Ecology. Jon, his wife Selina and their son Jin live on the family farm, where they enjoy gardening, walking trips to Long Pond and enjoying Caspian Lake during the summer.